In a tribute to both its soft and hard-hitting news, the city commission opened their February meeting with a proclamation applauding Coral Springs Talk and editor-in-chief Sharon Aron Baron.

The recognition was requested by City Commissioner Joy Carter, who credited the online news source for supporting residents like Frank Molino.

“One of their impressive stories -- and they’ve had many -- was they assisted a city employee who desperately needed a transplant. With the story they published, they helped him get a new kidney,” said Carter.

Carter then presented Coral Springs Talk with a proclamation from the city.

“It’s a labor of love because it’s not a labor of money. I have a few part-time writers, and we’re located right here in Coral Springs,” said Baron.

Editor of Coral Springs Talk since 2012, Baron reminded everyone that her labor of love, winner of the Florida Press Club’s Online Independent website Award five separate times, is no stranger to ‘hard-hitting news.’

Laughs ensued, following Baron’s video montage from the summer of 2019, when Commissioner Carter’s stuffed dog, Chauncey, was kidnapped, taken on a whirlwind trip, and later returned to Carter's hands.

“Sharon, that was awesome. I haven’t laughed so hard all day,” said Mayor Scott Brook, adding thanks for that and more serious contributions to the city.

Brook was joined by his peers on the dais, with Commissioner Shawn Cerra, who is also director of athletics and school activities for the Broward County Public Schools, speaking up about what he likes about Coral Springs Talk.

“On behalf of all the kids in our community, I just want to say thank you for the coverage of what’s going on with our schools and in athletics,” he said.

Vice Mayor Joshua Simmons, a high school history teacher, was the last to speak about the proclamation awarded to Coral Springs Talk.

“You cover everything from bikes being stolen, to what we’re doing here at the city, to athletics, you really help bring us together,” said Simmons. 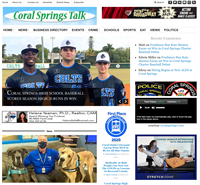